Yes, ironic, I know. But after reading this piece she wrote on peace, i've begun to gain a newfound respect for the woman. 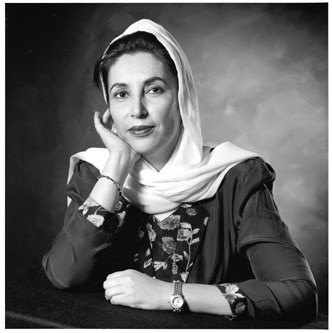 Many friends have messaged me (through all means! phone, facebook, email...) inquiring what my thoughts were on the current socio-political situation Pakistan finds itself in. Thanks so much for your concern amidst this chaos and turbulence.

The fact is, my views are not too different from the views the majority of Pakistanis (around the world) hold - that this event inspires shock, awe, disgust, pessimism and fear. Just when we thought the end of the "State of Emergency" would bring some stability with the prospects of elections just around the corner, things actually took a turn for the worse.

My question, though, is why should Pakistanis be surprised by this twist of fate? Bhutto never had a good reputation to begin with. After being ousted in 1990, she returned in 1993 - only to wreak more havoc. If she did finally return, why didnt she "pay her dues" (literally; no pun intended...) and start afresh, with a clean slate?

Instead, the masses remember her as the woman who looted, raped and pillaged the country. I remember her time in power, and was in awe of her persona. She was charismatic. If one looks at pictures of her from her college and young adult days, you can foresee that she was destined to do great things; not necessarily positive things, but great nonetheless.

And so, today, I am baffled again as to how the Western media is celebrating Bhutto's life. Why, I ask? Yes, she's liberal, progressive, a smart female and the scion of a major political family, but she's also corrupt, greedy, hypocritical, and power hungry. She is one person whose thirst for power and wealth rivals only that of General Pervez Musharraf. I looked to both of them for hope - Bhutto in the 1990's and Musharraf post-9/11 - yet neither stepped up to the plate.

So, I would like to make a humble request. Two, perhaps. For those of you affiliated with the media, please refrain from celebrating her life. It was not worth it. Can anyone recall any of her achievements? At least Nawaz Sharif connected the entire country with a network of highways and beautified the cities of Punjab in his quest to make them the "Paris of the East". Bhutto effectively created an elite class that is politically and socially so secluded from the masses, she could very well be christened Marie Antoinette.

Did Bhutto really intend on coming back to her homeland to "serve" her people? I consider such an action to be highly dubious. If her track record is any indication, she was all set to take the country by storm again. I'm sure she slept so peacefully at night knowing that her largely illiterate voters were to be taken advantage of again. When will my countrymen learn?

My second request is that we pray for her soul. I dont care what political stance one may have, such an event is not only reprehensible and worthy of our highest condemnation, but has led to the breaking of a family and the loss of a mother for three teenage children. No one should ever have to go through this agony. This violence that has emerged in the past few years in Pakistani politics has frightened me beyond words. It is amazing how dissent and divergent opinions can do so much harm to someone. Disappearing people, drive-by shootings, kidnappings are all accepted forms of treatment meted out to people who question authority. It's as if we've forgotten the nature of democracy - yet we yearn for it so intensely?

With Bhutto's passing, we have lost a major battle in the war our masses are fighting to gain democratic control of the country. She was a beacon, maybe not of hope, but a beacon and a trailblazer nonetheless. I will make no predictions about the upcoming elections and instead, am hoping against hope that we finally see some fresh leadership emerge from somewhere, somehow.

It is this very leadership deficit that has brought us to where we are today. In an article I wrote just weeks ago for The Epoch Times when Musharraf declared the State of Emergency, I mentioned in it how many of my generation never even considered a career in public service. So strong was the social stigma against politics; those who pursue it as a profession are probably either illiterate or wealthy, effectively excluding countless people from creating a better future for the country. Clearly, this most harmful trend must be reversed, lest we see the country's law and order situation spiral so out of control that we never see it regain a stable footing.

Lastly, an update from the ground: I have been in conversation with my family back in Pakistan including my father in Islamabad and my mother and sister in Lahore, and both parties basically paint a picture of a barren wasteland. These cities are large, vibrant and dynamic and so to hear of them as being devoid of cars on their streets, with no gas stations or convenience/general stores open is quite odd. Not a soul can be seen apparently. Till yesterday, phones and internet were not functioning.

A friend in Karachi said that the evening following Bhutto's death, there was a wedding in the family that was canceled at the last minute. When news broke of the attack in Rawalpindi, people in Karachi closed businesses immediately and run for dear life. My sister told of another wedding she attended where the groom's procession only included seven people - even close relatives were not present!

The three day mourning period ends Sunday and I imagine that by the time I arrive in Islamabad Monday afternoon, things should be heading back to "normal". I have never heard of nor seen such a day in Pakistani history. This one event will have reverberations across coming generations, let alone mine.

I think this might be my last blog entry till departure (Sunday morning, 12/30), but I will try and update with relevant articles and other resources as and when possible. I return three weeks from now, God willing.

Again, many thanks to all those who've communicated their thoughts and concerns. You've all been like a pillar of support to me in these trying times. As if it's not enough that I am going back to my homeland for a three week vacation (which is crazy in itself!), I now am under this constant tension. The burden, I fear, will not be lifted soon.

Pakistanis around the world are still trying to make sense of this horrific situation. Thanks to all those who have expressed concern and thanks even more for the prayers. Surely, they will not go un-answered.

I travel to Pakistan this weekend and arrive in Islamabad, amid tight security, I assume. Keep me in your prayers as well!

I was never a fan of Benazir and, in fact, thought she did more harm to Pakistan than good, but under no circumstances should such treatment be meted out to any individual.