I don't have access to a hard copy of the Washington Post, but i'm curious to know which section and what page this article must have appeared on. Considering the author is a former Indonesian President, i'm guessing it's the Op-Ed page. If it is, then wonderful! Such controversial and thought-provoking issues need to be discussed on the pages of such publications. As Muslims, I feel we have not done enough to make our voices heard in the media. Granted, the media may not want to hear those voices, but even the effort is sometimes lacking. This particular article is proof that we are taking steps in the right direction.

I particularly like how the author mentioned that Islamic law is forever changing. Because human interpretation is dynamic, so is Islamic law, which is divinely inspired, but interpreted by humans and hence, enforced by them. But it is the people who have mis-interpreted the law that we should be afraid of. They are the extremists and radicals we all should be fighting a war against - not the insurgents in Middle Eastern lands.

I highly recommend this article to all those who want a rudimentary understanding of the legal struggles facing Islam and Muslims today.
at 9:44 PM 3 comments: 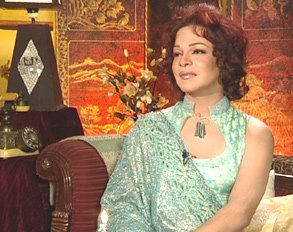 On my recent trip to Pakistan, I was quite shocked to see this guy on late night television. Needless to say, Pakistan has changed in the span of a few years, but even India can't "boast" of a cross-dressing tv host! Not just that, but what makes Begum Nawazish Ali so appealing, is the fact that she invites an eclectic blend of people on the show and manages to interview with such ease and poise, even politicians can't outwit her!

All in all, while Pakistanis are still trying to make sense of this unusual phenomenon, I enjoyed the show for its light-hearted take on serious issues and equally serious people.
at 2:02 AM 1 comment: