I'm scared of wearing this t-shirt 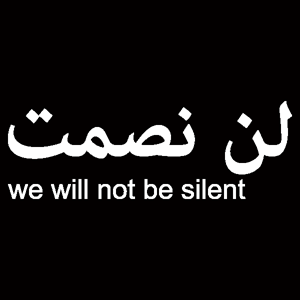 So when I read this article, one can understand the shiver that went down my spine as I recalled the day I wore the same t-shirt - that, too on my flight to Chicago. I think my brother, who was traveling with me that day, balanced us out by trying to look cool thereby neutralizing my not-so-cool attire? You folks decide.

Anyway, I must admit: every time I wear that t-shirt, I am nervous. I am fearful of what may happen to me. But those of you reading this, please know that it was for the masses of nameless, faceless people who died as unsung heroes, fighting for a better future - which many of us enjoy today. I am merely but paying my dues.

Accept this as a small token of my gratitude. I will not remain silent.
at 3:32 PM No comments:

Labels: civil liberties, civil rights, lan nasmat, We will not be silent

This article's title really intrigued me, and it goes without saying that I was definitely going to read it, but my real question was - which women? - Hindu, or Muslim?

The article is a simple news piece, but a real work of genius when you think of how different terms and language have been used.

Take, for example the title itself: "Indian film focuses on women in 2002 riot". The film is most certainly "Indian", yet the "women" in the film he refers to are Muslim - so why not mention that in the title? Instead, we find out only in the second paragraph that the protagonist is Muslim. If the focus of the film is this 23 year old pregnant girl, at least she deserves to be identified as a Muslim - the very reason for the violence she was victim to.

Then, towards the end of the piece, the writer did something I really detest - he called the film a "Hindi" film. Now, i'm pretty sure my criticism is directed appropriately, because many writers do this: they refer to Indian films as Hindi films. Why? I will never know. yet he still goes on to use "Indian" in the title of the article, but "Hindi" in the body. Very interesting!

Usually, what they're trying to say is that it is an Indian film, yet Hindi denotes the language of the film, and those of us familiar with South Asian cinema know all too well that Urdu is used almost always more often than Hindi.

But on that count, I may be mistaken, because the title of the film is kya hum jinda hai? with jinda being the hindi term for an urdu word, zinda - alive.

Anyway, semantics and use of language in unique ways never ceases to amaze me.

Forgive me if I have erred, and do leave comments if this spurs a discussion.
at 11:52 PM 5 comments: