A timeline of US Military Interventions

My friends over at the Global Policy Forum produce some comprehensive and highly useful information, and this is no different. The entire title of the work is "US Military and Clandestine Operations in Foreign Countries - 1890-Present"
at 11:20 AM No comments:

Article: Georgetown Sells out to the Saudis

As expected, there is a lot of negative feedback to the recent "significant" donation made by a Saudi Prince to Georgetown and Harvard Universities. It should come as no surprise then that some of the criticism is coming from a place known for criticizing anything that happens to even shed a bit of good light on Islam. The organization is Campus Watch, and is a watchdog that monitors Middle Eastern Studies on campuses across the United States.

Campus Watch is greatly influenced by Daniel Pipes, a man who has no qualms when talking about his extreme dislike for Islam. This piece though, is written by Alexander Joffe, Campus Watch's Director. The organization is itself anything but noble. To put it in layman's terms, it pretty much spies on anything remotely related to the Middle East and rouses enough protest against a cause it deems "inappropriate" that eventually, that program, event or person is ostracized. It's really a testimony to how propaganda works in the field of Middle Eastern Studies.

The article makes for a good "opiniated" piece to what I posted recently about the donation.
Please do leave comments. Im interested in knowing your views.
at 8:58 AM No comments:

My article - hot off the presses!

This week's column for The Post is not about my usual complaints regarding lack of media attention for Pakistani earthquake relief, but on something a bit lighter: South Asian music in New York.

This week, New York City was host to not only the greatest Sufi music, but also the greatest South Asian rock band, Junoon. Their concert was great, but lacked the real spirit behind Junoon, Ali Azmat. All good things must come to an end, right?

At the same time, New York also routinely plays host to some other performers who are greatly influenced by South Asian music but their names arent mentioned in the mainstream media. They include Brook's Qawwali Party, a group who sings Nusrat Fateh Ali Khan's qawwalis with a jazzy, western touch, and Paula Jeanine, who sings ghazals and thumris by taking tunes from songs sung by the maestros, but writes her own lyrics, thereby giving it her own interpretation.

All in all, a great week - musically speaking.
at 9:05 PM No comments:

Article: Saudi Gives $20 Million each to Georgetown and Harvard

This is an interesting development. I dont know where this article was placed in the Washington Post hard copy, but when I read it on the internet, I could envision it being buried somehwere in the paper so difficult to access, it wasnt even worth reading anymore.

What I'm more interested in, is seeing how the funding is used over several years. The original plan is to continue expansion on currently exisitng programs, but to embark on new endeavors as well. The real problem starts when the media attention goes away and the budget starts taking shape for future years. I recall reading accounts of think tank staff who were informed by the "higher-ups" that funding from certain individuals or organizations was being returned to their sources and no apprent reason was given for the decision. This happened to none other than Georgetown University, albeit several years ago.

Is this deja vu? Will the money be returned to the Saudi prince? But playing devil's advocate, do we even know the Saudi prince's intentions? Why this donation now, and why this amount? So many questions, but will we ever find answers?

Maybe if a person like seasoned politician Paul Findley comes along, perhaps. He was the one who wrote about these donations to think tanks and how the money was returned when the sources were questioned. Incidentally, this same Saudi Prince donated to a 9/11 fund and his donation was turned down by Mayor Guiliani, because the royal was critical of the US and its foreign policy.

One can only hope that the money will be used for a worthy cause. Islam and Muslims are greatly misunderstood and if think tanks and academicians at Harvard and Georgetown cant help in this noble cause, who else do we turn to?
at 1:05 PM 1 comment:

Wow...Politicians never cease to amaze me. How can one even harbor such feelings and get so far in politics?
It also reminds me of a comment one of the Scandinavian royals made several months ago, where Islam was described as a "threat" to them or something along those lines.

A few days after the Danish People's Party (DF) punished its Copenhagen mayoral candidate for publishing racist remarks on her website, removing her from the post as the party spokesman on educational affairs, her successor went ahead and described the Muslim religion as a terrorist movement.

Defeated mayoral candidate Louise Frevert's website compared Muslims with tumours, causing a public outrage. Though she blamed the statement on her website editor, DF punished her by removing her from a number of spokesman posts in parliament, including the one on educational policies.

Her replacement, Martin Henriksen, however, has also been criticised for having a website that is equally anti-Muslim.

'From its beginning, Islam has been a terrorist movement,' Henriksen stated on his website, warning against letting Muslims run for office in parliament and municipal councils.

'It's well known that Islam is lying low, well-knowing that no Islamic group or state has the military power it takes to conquer us. The goal we know, the method is to quietly take over and infiltrate our democratic institutions,' Henriksen said on his website.

Danish converts to Islam get their share of the blame as 'moral criminals'.

'These young Danes, who turn their backs on their heritage and thereby all of us, are committing an indescribable moral crime,' the website stated.

The website was discussed in a DF parliamentary group meeting last Thursday, where Henriksen said he had received full backing from his fellow party members.

'It shouldn't come as a surprise to anyone that an MP from the Danish People's Party is critical of Islam. It's a part of the party's policy, so I'm not removing anything from my website,' Henriksen told national broadcaster DR.
at 4:59 PM No comments:

This job opportunity with the UNDP is courtesy of my friends at the Foreign Policy Association.

The Research Assistant will be appointed for an initial period of three months (renewable once) and will work on three areas:

3. Direct Budget Support (DBS) and Poverty reduction Strategies: collect and collate material on the topic. The research Assistant will synthesize materials and propose a framework for understanding the implications of DBS for the design and implementation of poverty reduction strategies.

- Strong background in economics (preferably Masters' degree in Economics or related discipline), specifically in public finance and preferably within a focus on development issues.

- Interest in applied policy and good understanding of political economy

- Superior writing skills and ability to work with limited supervision

The Asia Society has turned out to be one of the few organizations based here in the US that is taking a proactive role in putting the word out about anything related to the recent Pakistani earthquake. Here's another event that looks quite interesting and worth attending...

The powerful earthquake that devastated the Pakistan-India border region on Oct. 8 has already claimed close to 80,000 victims, but millions more remain homeless and vulnerable. With winter approaching, conditions in many areas remain dire and are likely to worsen in spite of national and international relief efforts. The panel discussion will explore the current conditions on the border, analyze how India and Pakistan’s governments are responding to the devastation; examine domestic and international aid agencies’ rehabilitation and reconstruction work; and provide first hand account of how ordinary Pakistanis and civil society organizations are contributing in relief efforts. 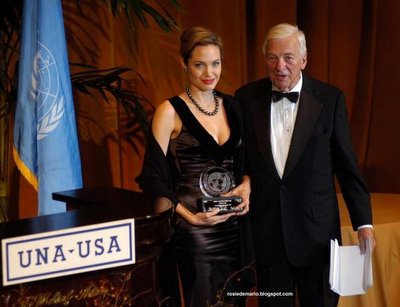 Pity me (or envy me) for the time I have on my hands, but I was watching "Best year ever" on VH1 a few nights ago and one of the top five people to be nominated for having a best year ever was none other than Angelina Jolie.

One of the people commenting on her success as both a great actress and humanitarian then went ahead and termed her the best "humanilebrity" out there. I cant recall who it was, but I did a google search on the term and found nothing.

The concept, though, is novel. It really does speak to the fact that Angelina has come out to be one of the most talented (and beautiful!) actresses Hollywood has produced, as well as a powerful voice for the under-priviliged all over the world.

Now, if only we could do something to further help the Pakistani earthquake survivors...
at 3:50 PM No comments: