From my column in last week's Pakistani paper, "The Post" (with slight amendments):

After an earthquake with a magnitude of 7.6 on the Richter scale struck Pakistan a few weeks ago, one would expect that the Pakistani people would take to the streets and not just demand – or beg – for aid, but for justice as well. It is no surprise that in a developing country like Pakistan, most of the casualties were impoverished people in small towns and villages. So, when CNN and GEO took to the streets, most stories narrated by interviewees included criticism of the military’s handling of relief efforts. One young man vehemently criticized Pakistani representatives abroad who sat in the UN, but could not produce results for their own people back home.

The fact of the matter is, the Pakistani army did a heck of a lot more than the US army could have done when Katrina did its damage. With the resources the American govt. could have mobilized, it was a shame to see a historical city rot while the world sat and watched in shock. The same cannot be said for Pakistan, though. The only real hope the Pakistani citizenry had was for its army to be pro-active in this ordeal and for the masses to show their zeal. Not only does the country lack the resources, but it lacks a strong non-governmental organization (NGO) presence and is heavily reliant on the United Nations and the few NGO’s for not just relief, but even developmental endeavors.

UNICEF and other Islamic relief organizations acted quickly and efficiently, but what was surprising was the expediency with which the US government acted. This fortunately, was a pleasant surprise. What good could the Pakistanis possibly expect to come from a nation ravaged by its own natural disaster, still reeling in its aftermath?

Other countries were equally generous, either donating millions of dollars or goods and commodities and even people to provide professional assistance. The same can be said of the Pakistani expatriate community. Organizations like Future Leaders of Pakistan (FLP) and Rising Leaders have been in contact with the Pakistani Embassy in Washington, D.C. and are hectically raising funds that can be transferred to either the President’s Relief Fund. The Association for the Development of Pakistan (ADP), based in Boston, is also making use of the generosity of its community and has thus far raised tens of thousands of dollars in just the past few days. The Association of Pakistani Physicians of North America (APPNA) also just put out a call for health professionals who are able to volunteer their time and expertise for the victims, while the Islamic Circle of North America has allocated half a million dollars for relief efforts. Reliant upon the philanthropy of individuals who now call America their home, organizations like FLP, ADP, Rising Leaders and APPNA are constructively giving back to their erstwhile home and are doing so quite effectively.

Other community members across the country are organizing smaller fundraisers where people can donate whatever they can afford to at venues like mosques and community centers. Inter-faith Iftars are being coordinated where people of all backgrounds can come together and see what they can do to help the victims of the earthquake. It is a unique moment when one feels proud to be a Pakistani, though struck by the grief unleashed by the natural calamity.

According to the international media, Pakistan’s situation is distressing because of the destruction of virtually hundreds of hospitals and deaths of scores of doctors, thereby making it extremely difficult to provide healthcare. If you speak to locals in most Northern Pakistani towns, they will tell you not only have they lost healthcare professionals, but an entire generation of people. For example, the children that were killed when their school collapsed on them as they were studying in school is as if one has lost all the future scholars and breadwinners for that region.

At least Musharraf has come out acting and looking like a true leader in this whole traumatic situation. He made the smart move of requesting helicopters, airplanes and tents for victims almost as soon as he got the chance to go on air with his messages for assistance and aid. What would have been shocking was if USA’s response was anything less than what they are currently doing. Fifty million dollars, a rare visit by President Bush to Pakistan Embassy to offer condolences and an unplanned trip to the devastated areas by the Secretary of State, along with mobilization of resources from military bases in the region was the absolute least the Americans could have done considering how we answered their call to fight terrorists and weed out insurgents in the “War on Terror”.

Now that Pakistan has been left grief-stricken, it looks to the world for assistance and hope. When this sort of terror strikes, no one searches for a culprit. One only searches for faith.
at 10:51 PM 4 comments:

The Power of Networking

After years of indulging in the activity myself, I have come to learn that networking is nothing more than socializing, but with the intent of gaining something meaningful from the relationship that is established, and hopefully, being able to give something back. Very much like a symbiotic relationship, for all you science students out there.

The truth of the matter is, networking is also the best kept secret when it comes to employment. A secret that is only now becoming well known and popular. I’ll give you the perfect example, which will prove even more useful to recent college graduates.

I have been involved in student government at the City University of New York for over two years now, and in my second year, I had the opportunity to serve as a voting member on a high-level committee on which the Chancellor, Matthew Goldstein, also sat. After a thoroughly detailed, though relatively short meeting one Monday afternoon, the Chancellor and I spoke briefly after the meeting, the short conversation eventually leading to what my future plans were, as he was aware I would be graduating soon. So I told him I desired to work for the United Nations (UN). He quickly told me of a contact he had at the UN, and asked that I send my resume over to his office as soon as I could. One can very well imagine what was going through my mind on the way back home from that seemingly eventful meeting.

I emailed the Chancellor my cover letter as well as resume and waited a few days until I received a call from the head of a UN agency, asking that I visit their offices and speak more about how they could help me realize my goals. One thing led to another, and a few weeks later, I landed an internship at the United Nations. What is worth noting is that the Chancellor asked me to send my resume over with the intention of getting me a job, or at least an interview for a job. But neither happened. What I got was an “informational” interview, and it didn’t land me a job. Then again, one shouldn’t be ungrateful. What did come out of those interactions was the creation of relationships with some powerful people and for a young, 20-something year old, the few cards in your rolodex are worth taking pride in!

My experiences with networking have taught me that a powerful social circle, if leveraged correctly, can be the tool for success. Countless individuals exist right here in the USA who performed pathetically in their college careers and went on to do amazing things, mostly as a result of networking. It’s what politicians depend on, what entertainers thrive on and what all of us should truly strive to be good at.
at 10:38 PM No comments: 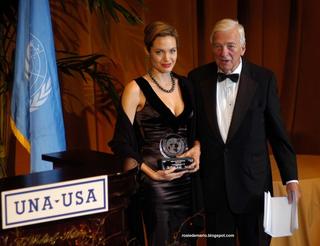 I had the good fortune of attending the United Nations Association Annual Awards Ceremony where Angelina Jolie was presented the UNA-USA 2005 Global Humanitarian Action Award. High level UN staff and diplomats were present and everything was phenomenal, from the food to the ambience; almost surreal.
It was my first time at the Waldorf Astoria Hotel's Grand Ballroom which is a work of art in itself, but seeing and listening to Angelina Jolie was even better. She is charismatic, graceful and elegant and should be appluaded even more for the great work she has done and continues to do.
at 4:11 PM 1 comment:

An article from my column

September was a good month for me.
I started my Masters in International Relations from the Graduate Center of the City University of New York, celebrated my 24th birthday and even got the chance to start writing a column for a Pakistani paper, The Post.
The first piece appeared in The Post on October 12th, and was written in about two hours, which was beyond me. I guess the information was all in my mind, so I just went ahead and wrote and wrote and wrote. Mind you, it had been a good few months since I had done any writing, considering I had graduated from Queens College-CUNY this past June and hadnt written much at all, if anything, since then.
at 1:27 PM No comments:

Wow. This is quite interesting.
Im not one for technology. I like it when it becomes a household appliance and so I can ask around for help without having to worry about "discovering" the device and its features.
But blogging is pretty simple. As you can see, ive made it thus far, how hard could it have possibly been?
Dont answer that.
Anyway, with that, I part ways with you - but only temporarily. I shall be back with some cool stuff to share.
at 12:43 PM 1 comment: